This is the start of my blog about me as musician Ron Boots and Groove Unlimited.
I always get questions by fans that would like to know how things come together. Planning of a concert, a new CD release, setting up Groove Unlimited what gear do I use etc etc.
So through these blog's I hope to give you some insight in the musician Ron and Groove as a label.
Who am I? Ron Boots build year 1962 and into music since my 16th.
When we started a school band where I sung (I could not play any instruments well and noticed that guitar players and singers always had the prettiest Girlfriends.
At that time I was already a fan of electronic music, Jean Michelle Jarre, Vangelis, Klaus Schulze and Tangerine Dream where on the foreground.
But also Mike Oldfield, Pink Floyd, Genesis where played a lot in that time. I started with Synthesizers around my 18th with a Yamaha CS 10. 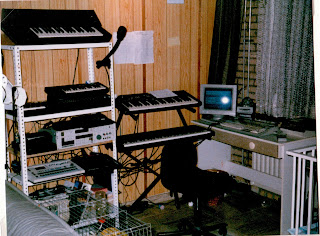 I already had a Casio keyboard and with these tools the road to Electronic music was started.

At the end of the 80's there was a good fertile ground in Eindhoven (the Netherlands) for EM.
And with the association of KLEM (a dutch organization of fans of Electronic music lovers) in Eindhoven it all started. We listened to music, swapped tapes and the few musicians there (among them Bas Broekhuis) auditioned their first musical fruits.

In 1988 we started with what is now E-Live, perhaps the longest ongoing Electronic music festival in the world. The first artist to perform there where Bernd Kistenmacher, Patrick Kosmos, Gaya, and Bas Broekhuis. 8 Weeks before the festival the Durch group Gaya broke up and the other guys and girls in the organization dictatorially&democratically  decided that I should open the day. 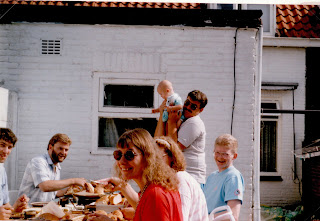 here is a brunch of the organizers of the first KLEMdag 1988.
from left to right, Manuel, Ron D, Maranka, Ingrid, Ron B and Frans.
Kees van Bree is taking the picture!

And so it was that on a nice warm Saturday afternoon in September I played my first solo Concert.
We had hoped for 80 people on that day but when the door opened and I was going on stage more then 200 people where in the hall of the Prinsenhof in Best.
It was a wonderful day with a fantastic concerts by Patrick Kosmos who became a big inspiration the the following years and Bernd Kistenmacher. Who became a nice friend and who is in fact this year on the 27th of October playing again after 24 years on E-Live!!

In these days CDs where very expensive to make and the standard cassettes where a good alternative to release ones music. I am not going to bore you with my biography, if you would like to know more about the start and these times I might suggest this page http://www.ronboots.com/bio.html
It features a nice biography about me and the start of Groove to the time we are now.

A list of musicians that are, even today after 20 years of Groove at the top of the electronic music scene.
A blog should not be a promotional story but give you readers a look behind the scenes, but in this first introduction it is always nice to paint a picture of what Groove is all about.
And Groove is Ron Boots and all about Electronic Music. I love it, live it and breath it. As a musicians, a label chef, a festival organizer or distributor. There is so much great music out there to enjoy.
And I hope that this first attempt of a blog is a new look behind the world of Electronic Music.